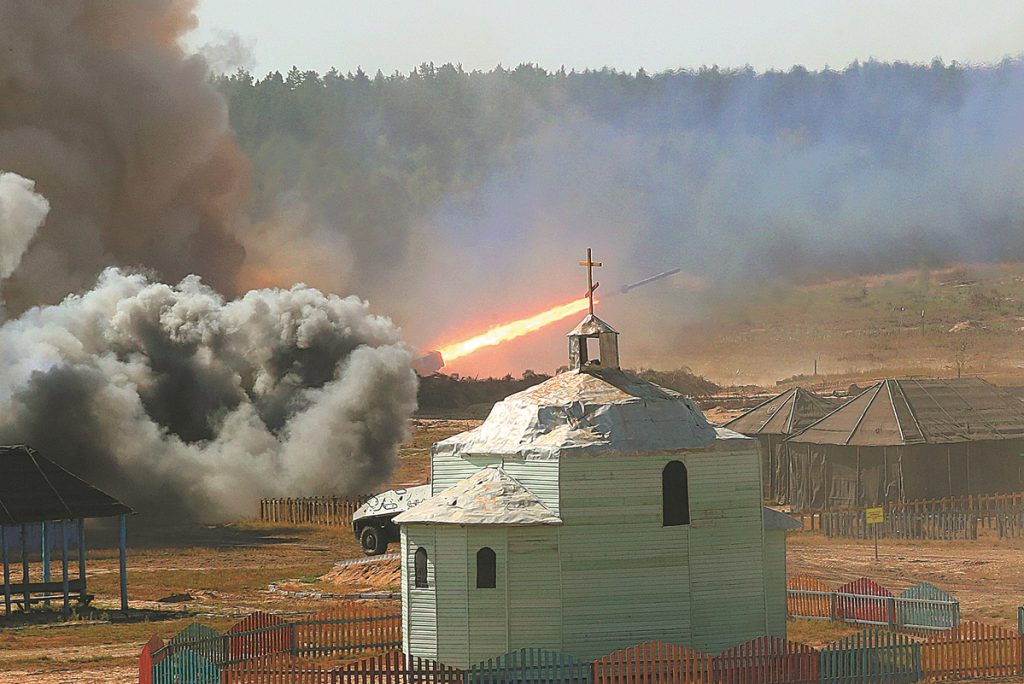 At drills, Belarus leader talks up $1b deals

Belarusian President Alexander Lukashenko said on Sunday that his government planned to buy $1 billion worth of Russian arms as he oversaw a massive military drill led by troops from the country’s neighbor. The scale of the exercise has rattled leaders in some European nations.

Sporting a green military uniform at a test range near the city of Baranovichi in western Belarus, Lukashenko praised Russian and Belarusian troops for their “high state of readiness” to jointly defend their borders and counter what he called “hybrid aggression” from the West.

The military drills were launched by Russia and Belarus on Friday. Agence France-Presse said they amounted to one of Moscow’s biggest exercises in recent years.

Lukashenko said S-300 systems were currently deployed to protect Belarus from the West, but he needed a more advanced system to secure his country’s southern border with Ukraine. Planned purchases could exceed $1 billion, according to the Belorussian state news agency Belta.

Lukashenko said that by 2025, he wants dozens of new warplanes and helicopters from Russia.

The Belorussian leader revealed that he explained to Putin where he wants to deploy the S-400 systems, and that Putin ordered his defense ministry to initiate discussions with Minsk.

The Zapad-2021 maneuvers are taking place in Russia and Belarus until Thursday, and involve as many as 200,000 troops, 80 warplanes and helicopters, 760 armored vehicles and 15 ships, according to Russia’s defense ministry.

Putin on Monday attended the main stage of the maneuvers at the Mulino shooting range during a visit to the Nizhny Novgorod Region, about 400 kilometers east of Moscow, according to the Kremlin. Other participants include Armenia, Kazakhstan and Kyrgyzstan.

Russia is stepping up its military presence in Belarus by deploying Su-30SM fighter jets for joint patrols. Forces responsible for antiaircraft missiles have begun joint missions along Belarus’ western edge, which borders nations in the North Atlantic Treaty Organization, according to Belarus’ defense ministry.

Lukashenko thanked Putin for agreeing to supply Belarus with weapons valued at more than $1 billion by 2025. “I will not disclose the sum although this is also not a huge secret－that’s more than a billion dollars,” said Lukashenko, adding that the consignment included about 10 planes, several dozen helicopters and a Tor surface-to-air missile system.

On the eve of the exercise, Putin said the drills were “not directed against anyone” and Lukashenko struck the same note on Sunday.

But Polish Prime Minister Mateusz Morawiecki has warned of possible “provocations” and said the exercises were one reason Warsaw introduced a state of emergency.

NATO allies Latvia and Lithuania have also been locked in a similar standoff with Belarus over migrant flows into the European Union states.