Survivor John Elliot watches as Yetsi’tsyaronkwas plants an apple tree at a ceremony remembering survivors of the Mohawk Institute, a residential school for indigenous children that operated for 136 years, with the planting of commemorative apple trees on the former grounds which is now the Mohawk Village Memorial Park in Brantford, Ontario, Canada May 24, 2022. [Photo/Agencies]
OTTAWA－The Canadian government said on Monday it has signed a C$20 billion ($15.55 billion) agreement to compensate First Nations children and families harmed by chronic underfunding of child welfare.

The Assembly of First Nations and plaintiffs in two class action lawsuits agreed to the deal.

Indigenous Services Canada, a government agency, said the settlement is the largest in Canadian history. 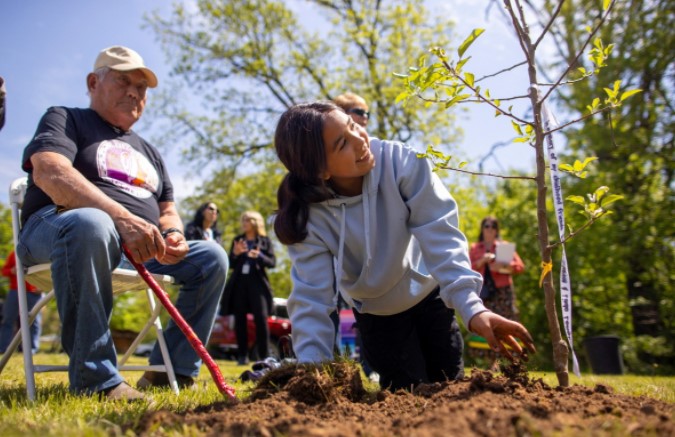 “The parties have agreed on a plan for settling compensation claims to recognize the families and people who have suffered tremendously through discriminatory and systemically racist child-welfare practices,” Indigenous Services Minister Patty Hajdu said.

The settlement accounts for half of an overall C$40 billion deal that aims to reform Canada’s child welfare system, including five-year funding for the First Nations Child and Family Services program.

Hajdu told The Canadian Press that negotiation is more complex, and requires the creation of “built-in mechanisms to ensure that children get equal and adequate care, and increasingly, that Indigenous communities have the tools they need to seize that control of that care themselves”.

The final settlement agreement will then be brought to the Federal Court of Canada for approval. If approved, the process to implement the settlement will begin, a statement said.

Cindy Woodhouse, the Manitoba regional chief at the Assembly of First Nations, praised the deal.

“And after three decades of advocacy and months of negotiations, I’m proud to say on behalf of the AFN that we have reached another historic milestone for our children and their families,” she said in a statement.

The First Nations Children and Family Caring Society and the Assembly of First Nations filed a complaint under the Canadian Human Rights Act in 2007, arguing that Indigenous child welfare services were chronically underfunded compared with services provided to children in other communities.

Data from the 2016 census shows that less than 8 percent of Canadian children aged under 15 are Indigenous, but Indigenous youths make up more than half the children under that age in foster care.

The Canadian Human Rights Tribunal ruled in 2016 that the federal government had discriminated against First Nations children. The government appealed the ruling, but the court upheld the decision.