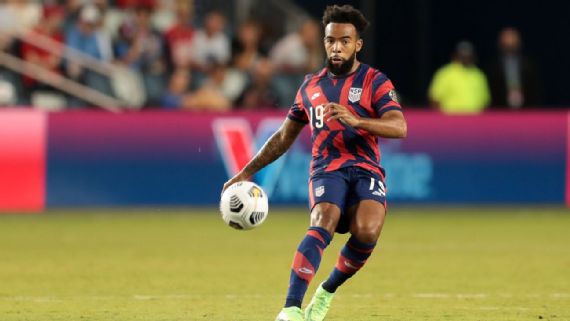 The 24-year-old has now parlayed that into his first forays with the U.S. men’s national team. Last Sunday Williamson made his international debut, helping the U.S. to close out a 1-0 victory over Haiti in the Gold Cup. He followed that up with his first start in a 6-1 win against Martinique, showing well in midfield and adding an assist on Miles Robinson’s goal.

But Williamson has been anything but an overnight success. Along the way he’s learned that even when he’s pushing for more, there are no shortcuts, and that means there are moments when he needs to bide his time.

“I think we get caught up in the bigger picture a lot of the times, especially as athletes. ‘I want to be where Tyler Adams is. I want it to be tomorrow’. But there’s so many steps,” he told ESPN. “You’re talking to the Tylers, you talk to the guys and it wasn’t one day where, boom, you flip a switch. It’s chipping away at it every day, and I think that’s the mentality we have here [with the U.S.]. One day at a time and make sure I can put myself in the best position.”

Williamson claims to have been pretty easygoing growing up. It was only when he got older that he seemed to be in a rush. But his mother, Nicole Brisco, who raised Eryk and his three siblings on her own, isn’t buying it.

“Eryk was very impatient. He always wanted something to happen right away,” she said to ESPN. “I noticed when he tried out for the first year for [the Olympic Development Program], and he didn’t make the national pool, he wanted to give up soccer. It just tore him apart. And I just said, ‘You’ve got to be patient.'”

She adds with a laugh, “I guess he eventually got there. But that was the roughest trip back home from Pennsylvania I’ve ever had to do in my life. I don’t know who cried more. I think I did.”

Williamson did indeed get there, although there were some blind alleys that he went down. A native of Alexandria, Virginia, he stood out in the talent-rich area of the DMV. His time at D.C. United’s academy, as a youth international and at the University of Maryland had him pegged for great things. This was a player who could do it all in midfield, be it carry the ball into attack, set up scoring opportunities, as well as defend, giving him a distinct profile among American midfielders.

Then his career hit a wall. A trade for his Homegrown rights from D.C. United to Portland in 2018 was expected to provide an opening to take the next step in his career. Instead, Williamson found himself stuck with Portland’s reserve team. A loan spell that same year with Santa Clara in Portugal was hoped to provide some additional playing time, but resulted in him playing nary a minute in six months. Upon his return to Portland, his prospects didn’t improve all that much. While he was handed a smattering of first-team minutes, he largely remained outside the reckoning.

Moore grasps chance as USMNT kicks off Gold Cup campaign
5dJeff Carlisle
In the view of Portland manager Giovanni Savarese, he saw a player in Williamson that wasn’t doing everything that he could.

“I think when you are so talented, things are so easy, and you can get by with the minimum,” Savarese told ESPN about Williamson. “You’re still very good, but I don’t want the minimum of you. I want the best of you.”

It was in that period that patience proved to indeed be a virtue for Williamson and forced a reexamination of his approach to his career. Rather than focus on the broader picture of what he didn’t have or why he wasn’t in the lineup, he put his energy into the little steps that it took to improve his game.

“For me, [Portugal] was an eye-opener,” he said. “I think once I got back from there, it was, ‘This is what I need to go out and do every day.’ I got into a routine of: Can I be the best player on the field? Can I set the goal that Gio was going to come up to me and say, ‘Yes, you’re the best player in training this week, this month.’ I took that into 2020.”

What emerged was a motivational mosaic. Williamson went down to Costa Rica for the 2020 preseason determined to leave Savarese with no choice but to put him in the lineup. He studied more film and took advice from the likes of longtime friend Jeremy Ebobisse and Chara. He began to feel more confidence from Savarese as well. The goals then expanded, from being the best in practice to getting into games, to influencing games, to excelling.

Then the pandemic hit, and the league was shut down.

Eryk Williamson has made a strong first impression with the USMNT, making his senior international debut at the Gold Cup. John Dorton/ISI Photos/Getty Images
“I started the year so well, and then I thought all that preseason, all the work, the video, all the little technical things I was working on was all going to waste,” he said.

Another emotional hit came when his grandmother, Aileen Ford, died that April. The two were close, with Ford among Williamson’s go-to supporters when times got difficult.

“They had such a great relationship,” Brisco said about her son and mother. “Eryk doesn’t talk about a lot of stuff like that. But I really think that that really pushed him last year, and he really, really came on.”

Savarese isn’t sure what changed, but when Williamson returned for the MLS Is Back Tournament (which the Timbers won) he looked like a different player.