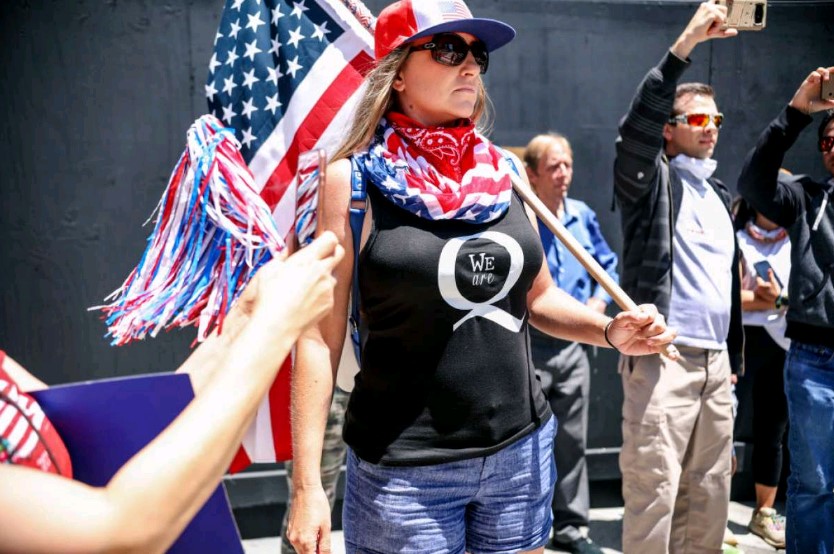 ‘Are we the sheep?’: QAnon believers struggle to process Gavin Newsom recall election in California

One day before the Gavin Newsom recall, adherents of the QAnon conspiracy belief system are busy attempting to invalidate the election results before they even come in — but they’re torn on what exactly comes next.

Although most people likely assume QAnon has its deepest roots in places like Florida or Texas, the extremist ideology has made significant inroads in California. It’s particularly noticeable in Orange County and San Diego, where people sporting QAnon flags and shirts have been seen at anti-lockdown and anti-Newsom protests over the past year. In addition, four of the candidates running to replace Newsom have expressed support for QAnon, Media Matters reports.

For the uninitiated: QAnon believers, who call themselves “anons,” think a secret military operation is “in control” and will soon purge the nation of their political enemies and restore Donald Trump to power. The conspiracy theory began in 2017, and until late 2020, someone using the name “Q” posted regularly on the message boards 4chan and 8chan (later renamed 8kun). Anons continue to furiously decode these “drops,” convinced they contain information about the secret military operation they believe may march into the White House and arrest Joe Biden at any time. (There is a great deal of speculation that Q was, at least for a time, 8kun admin Ron Watkins, who now posts messages on Telegram that often bear a striking linguistic resemblance to old Q drops.)

In the lead-up to the Newsom recall, anons have glommed onto a December 2018 Q post in response to a commenter asking, “Will voter fraud in CA ever be brought to light?” “Watch CA,” Q wrote back. Three years on, some are convinced this means that Newsom will fraudulently win this recall election and, confronted with overwhelming evidence of this alleged fraud, Californians will kick off a national audit that gets Trump back into office.

“DETHRONING Newsom is THE catalyst for the MAIN EVENT,” wrote QAnon influencer John Sabal (who goes by QAnon John) on Telegram last week.

KYLE GRILLOT/AFP via Getty Images
If you were struck by the dubiousness of California’s 10 million-plus registered Democrats suddenly being swayed by this argument, keep this in mind: Many QAnon believers think California is majority Republican. In the weeks after the 2020 presidential election, QAnon discourse was full of baseless assertions that Trump won California; in reality, Biden received 11 million votes to Trump’s 6 million.

In an attempt to sow the seeds of this “rigged” election narrative, one popular QAnon forum has been filled with stories pushing California election misinformation. One highly upvoted story in recent days was headlined: “Gov. Gavin Newsom warns Californians: ‘You will all die of COVID if I’m recalled.’” Although this is written as a direct quote, Newsom never said this.

Another story gaining fast traction is from Los Angeles TV station KTLA. “San Fernando Valley residents have trouble casting recall ballots” quotes only one 88-year-old voter as having issues at her polling place. When she raised the problem to poll workers, she was given a provisional ballot and allowed to cast her vote.

Nonetheless, the story is being parroted across the far-right ecosystem as proof Republicans are being prevented from voting in the recall. Along with there being no evidence that only Republicans encountered issues with the single San Fernando Valley polling place in question, the story clearly states the woman did end up casting a ballot.

Trying to invalidate a Newsom victory before results even roll in isn’t just happening on the fringes, however. Republican recall frontrunner Larry Elder has ramped up talk of a “rigged” election in the last week, coinciding with polls turning decidedly in favor of Newsom keeping his job. On Elder’s website, there’s a prominent button on the homepage that says “STOP FRAUD” that takes you to a site where you can self-submit alleged instances of voter fraud. The site also has a red button asking for donations.