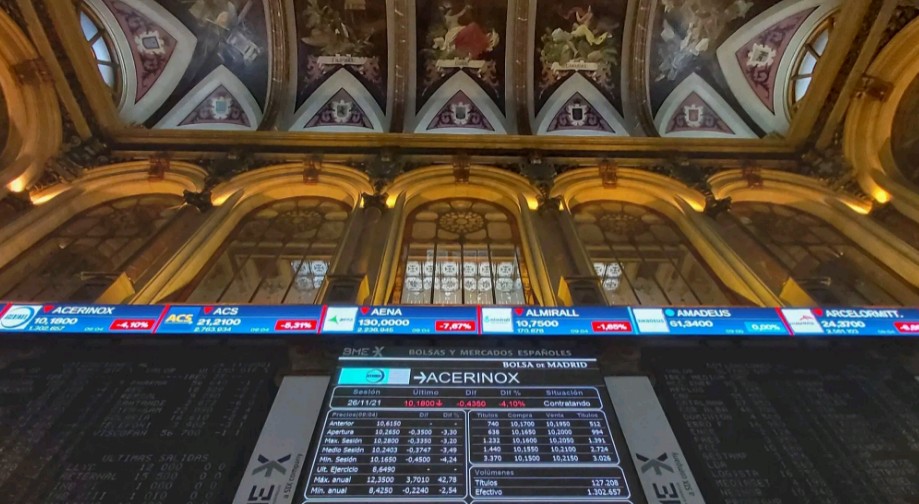 Stocks around the world fell on Friday and oil prices plunged, after evidence of a new coronavirus variant in South Africa prompted another round of travel restrictions and reignited concerns about the economic toll imposed by the pandemic.

The S&P 500 logged its worst day since February as a growing list of nations, including the United States, moved to prohibit travel from half a dozen or so African countries. The uncertainty shook a stock market that had been performing robustly, and market watchers said the heightened volatility might continue as countries assessed the risks of the variant.

The number of mutations in this new variant has raised fears that it could be especially contagious and render current vaccines less effective. But scientists haven’t come to firm conclusions yet.

“Where the market is selling off so dramatically is a product of, ‘yes, this is bad news,’ but also the fact that we have had a pretty strong run with relatively low volatility for a while,” said Kiran Ganesh, a strategist at UBS Global Wealth Management. “It’s still too early to really judge what this variant is going to do.”

Daily business updates The latest coverage of business, markets and the economy, sent by email each weekday. Get it sent to your inbox.
The S&P 500 closed 2.3 percent lower and the Nasdaq composite index dropped 2.2 percent. European stock markets fell 3 to 5 percent.

U.S. stock markets were closed on Thursday for the Thanksgiving holiday and closed early on Friday. Thin trading because of the holidays can exacerbate the swings.

Friday’s decline pulled the benchmark S&P 500 down further from a record high reached just last week. Amid supply chain disruptions and shortages of goods and workers in some sectors, investors have been preoccupied by rising prices and expectations about central banks withdrawing stimulus to combat inflation.

But the emergence of a new variant abruptly shifted their focus back to the core woes of the pandemic. A fourth wave of the virus in Europe has already led to a tightening of restrictions, including some lockdowns.

Don Johnson Is Back as ‘Nash Bridges.’ Why?

“The pandemic and Covid variants remain one of the biggest risks to markets, and are likely to continue to inject volatility,” Keith Lerner, a strategist at Truist, wrote in a note to clients.

Business & Economy: Latest Updates
Updated
Nov. 26, 2021, 4:37 p.m. ETNov. 26, 2021
Nov. 26, 2021
A different kind of remembrance.
Shoppers with their Black Friday prizes.
Recent thefts cast a pall over Black Friday in San Francisco.
Mr. Lerner said a modest sell-off is hardly unexpected, given the heights at which stocks have been trading. “We are not making any changes to our investment guidance at this point,” he wrote, adding that consumers and companies are much more adept at dealing with virus restrictions now.

Futures of West Texas Intermediate oil, the U.S. crude benchmark, plummeted more than 13 percent to $68.04 a barrel, the lowest since early September. The price of oil has been especially sensitive to virus restrictions that keep people at home. The drop comes just three days after the United States and five other countries announced a coordinated effort to tap into their national oil stockpiles, to try to drive down rising gas prices.

Brent futures, the European benchmark, fell 11 percent to about $73 a barrel. But Mr. Ganesh said UBS forecasts that the price will rise to $90 a barrel by March, partly in the expectation that the fears about new virus restrictions will be temporary.

Demand for the relative safety of government bonds jumped, pushing their prices up and their yields down. The yield on the 10-year U.S. Treasury plunged 15 basis points, or 0.15 percentage points, to 1.48 percent, the biggest single-day drop since March 2020. The yield on Germany’s bund, Europe’s benchmark bond, fell 9 basis points to minus 0.34 percent.

In an echo of the market fluctuations of last year, stocks that flourished under lockdowns and quarantines rose, including Zoom and Peloton. Companies vulnerable to travel restrictions, like Carnival, the cruise company, and Boeing, the plane maker, fell.

In Asia, the Nikkei 225 in Japan closed 2.5 percent lower and the Hang Seng Index in Hong Kong declined 2.7 percent.

In Europe, energy stocks led the markets lower. The Stoxx Europe 600 index closed down 3.7 percent. The FTSE 100 in Britain dropped 3.6 percent, while major stock indexes in France and Spain fell about 5 percent.

As several countries including Britain and France rushed to restrict flights from South Africa and seven other African nations, airline stocks dropped. IAG, the parent company of British Airways, fell nearly 15 percent, the biggest decline in the FTSE 100.

“This fresh fall in confidence is the last setback the industry needed given that it’s already faced with lockdowns in Europe,” Susannah Streeter, an analyst at Hargreaves Lansdown, wrote. “It’s going to take much more than a discounted ticket to calm nerves and restore optimism.”