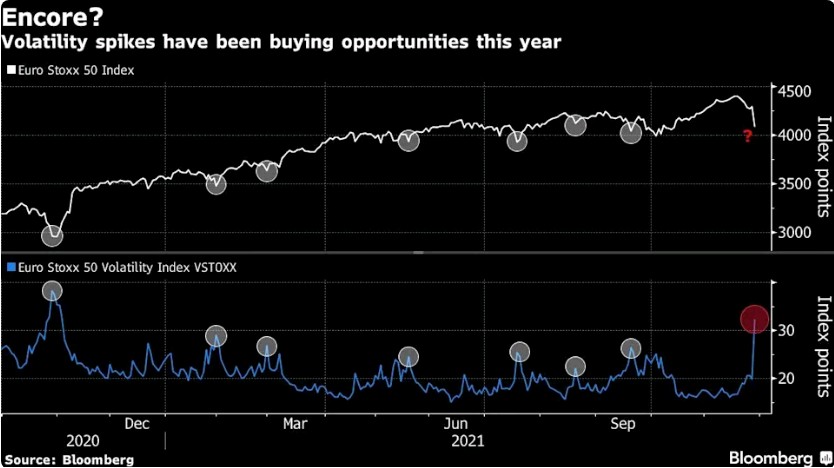 The Stoxx Europe 600 index jumped more than 1%, recovering some of their worst drop in more than a year, with travel and energy stocks leading the advance. S&P 500 and Nasdaq 100 contracts climbed, WTI oil rallied back above $71 a barrel and the 10-year U.S. Treasury yield rose past 1.50%. The euro slipped and a dollar gauge ticked up.

Investors are trying to work out if the omicron flareup ends up being a relatively brief scare that markets rebound from, or a bigger blow to the global economic recovery. Much remains unanswered about the new strain: two South African health scientists suggested it’s presenting with mild symptoms so far, but the World Health Organization urged caution, saying it will take time to assess the pathogen.

“Despite the irresistible pull of buying-the-dip on tenuous early information on omicron, we are just one negative omicron headline away from going back to where we started,” Jeffrey Halley, a senior market analyst at Oanda, wrote in a note. “Expect plenty of headline-driven whipsaw price action this week.”

The emergence of the omicron strain is also complicating monetary policy. Traders have already pushed back the expected timing of a first 25-basis-point rate hike by the Federal Reserve to July from June. Fed Bank of Atlanta President Raphael Bostic played down economic risks from a new variant, saying he’s open to a quicker paring of asset purchases to curb inflation.

“We know that central banks can quickly switch to dovish if they need to,” Mahjabeen Zaman, Citigroup senior investment specialist, said on Bloomberg Television. “The liquidity playbook that we have in play right now will continue to support the market.”

Japan led declines in the Asian equity session after the government shut borders to visitors. The region’s reopening stocks such as restaurants, department stores, train operators and travel shares also suffered some losses.

Meanwhile, Moderna Inc.’s chief medical officer said a reformulated shot to combat the new strain could be available early in the new year.

Elsewhere, the currency of South Africa, where the variant was identified, climbed against the greenback though most emerging-market peers declined. Gold dipped below $1,800 and ounce, and Bitcoin rallied above $57,000 after falling below $54,000 on Friday.

These are some key events to watch this week:

Some of the main moves in markets:

The Japanese yen was little changed at 113.35 per dollar

The British pound was little changed at $1.3331

The yield on 10-year Treasuries advanced five basis points to 1.52%

Most Read from Bloomberg Businessweek