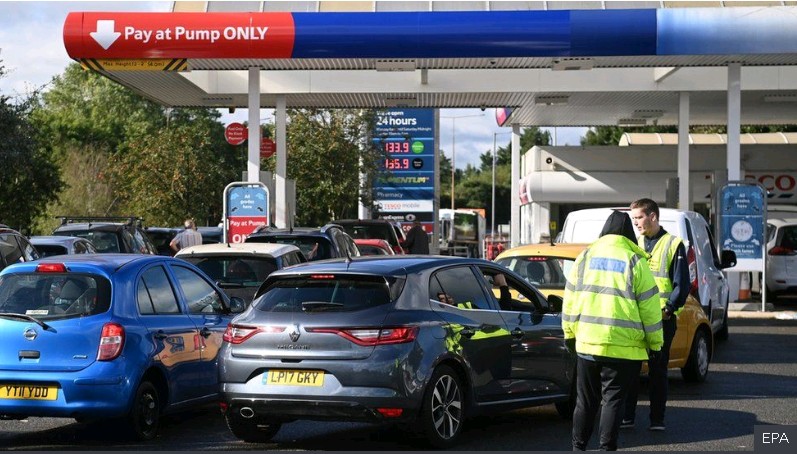 The Army has been put on standby to help ease pressure on petrol stations and deliver fuel after days of long queues and pump closures.

Military tanker drivers will be trained so they are ready to be deployed if necessary, the government said.

Business Secretary Kwasi Kwarteng described it as a “sensible, precautionary step”, saying the UK had strong supplies of fuel.

Fuel suppliers say they expect demand to return to normal in the coming days.

But motoring group the RAC say the price of a litre of unleaded petrol has risen by a penny since Friday and it is aware of a small number of retailers taking advantage of the current situation by hiking prices.

Ministers have blamed queues at petrol stations and empty pumps on people buying fuel when they do not need it.

Many drivers rushed to petrol stations amid fears a shortage of lorry drivers would hit fuel supplies.

Why are there long queues for petrol in the UK?
‘I’m at an Airbnb this week to avoid fuel queues’
UK visa plan will not fix lorry crisis, says boss
Police warning after 100 calls over fuel queues
Mr Kwarteng said: “We are aware of supply chain issues at fuel station forecourts and are taking steps to ease these as a matter of priority.

“If required, the deployment of military personnel will provide the supply chain with additional capacity as a temporary measure to help ease pressures caused by spikes in localised demand for fuel.”

The government has also authorised an extension to ADR driver licenses – which allow drivers to transport goods such as fuel. Licences due to expire between 27 September and 31 December will have their validity extended until 31 January 2022 without the driver having to undertake the usual refresher training or pass an exam.

The government said the change would provide “immediate relief” to the shortage of fuel drivers by allowing those affected to stay on the roads.

media captionKey workers and essential trips affected by panic buying
Earlier, a group of leading fuel suppliers, including BP and Shell, said there was plenty of fuel at UK refineries.

“As many cars are now holding more fuel than usual, we expect that demand will return to its normal levels in the coming days, easing pressures on fuel station forecourts,” they said in a joint statement.

Prioritise key workers
Brian Madderson, chairman of the Petrol Retailers Association, said the industry had problems with a shortage of HGV drivers but it only became a “critical situation” when a submission by BP to the cabinet was leaked, sparking widespread coverage and panic buying.

The shortage of lorry drivers has caused problems for a range of industries in recent months, from supermarkets to fast food chains.

Meanwhile, doctors and home care staff have called for essential workers to be given priority for fuel.

The UK Homecare Association said people had been left waiting for carers at home because staff had been caught in queues for petrol.

However, ambulances have their own fuel pumps in their depots and their supplies are expected to be prioritised.

The government has temporarily exempted fuel companies from competition law, as part of “long-standing” contingency plans to maintain supplies, allowing them to target supplies at areas most in need.

It has also announced temporary visas, lasting until Christmas Eve, for 5,000 foreign fuel tanker and food lorry drivers and 5,500 poultry workers in a bid to limit disruption in the build-up to Christmas.

Other measures include sending nearly a million letters to drivers who hold an HGV licence, to encourage them back into the industry, and plans to train 4,000 people to become HGV drivers.

Factors including Brexit, Covid, pay levels and an aging workforce have all contributed to a shortage of lorry drivers.

After the UK left the EU, many European drivers went back to their home countries, or decided to work elsewhere because of the additional border bureaucracy and the impact it had on their income.

The pandemic also prompted many foreign drivers to return home and led to a huge backlog in HGV driver tests.