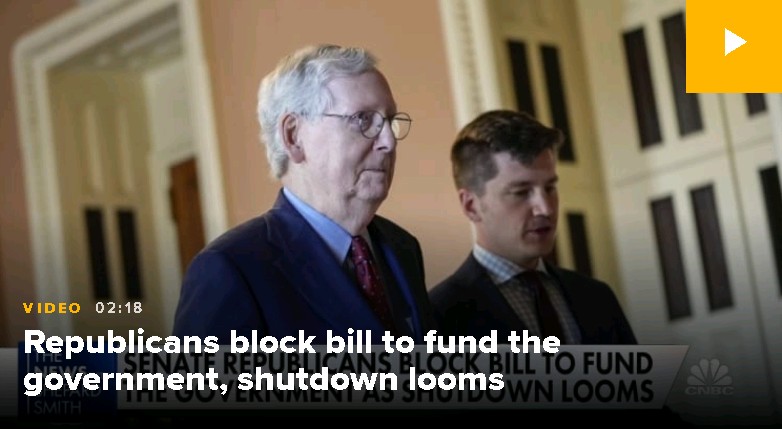 Congress is running out of time to prevent a shutdown and a default.

Senate Republicans on Monday blocked a bill that would fund the government and suspend the U.S. debt ceiling, leaving Democrats scrambling to avoid a possible economic calamity.

The House-passed legislation would have funded the government into December and suspended the U.S. debt ceiling into December of next year, after the midterm congressional elections.

Lawmakers need to approve government funding before Friday to avoid a shutdown. The U.S. risks default if Congress doesn’t raise the debt ceiling by a point that is likely to come in October, according to the Treasury Department.

After every House Republican opposed the measure, the Senate GOP also refused to help Democrats suspend the debt limit. In a 48-50 vote, all Republican senators opposed advancing the legislation. Senate Majority Leader Chuck Schumer, D-N.Y., voted no as a procedural move so he can bring up the bill again later.

Democrats now have to pull off a daunting series of maneuvers to avoid a sequence of events that could ravage the economy and cost millions of Americans their jobs. The Republican opposition may force them to pass a short-term funding bill with GOP support, then approve a debt limit suspension on their own — potentially as part of their up to $3.5 trillion budget reconciliation plan.

“The Republican Party has solidified itself as the party of default, and it will be the American people who pay the price,” Schumer said after the vote.

Senate GOP blocks bill to raise debt limit, avoid government shutdown
U.S., EU will discuss global trade and tech cooperation
Marvel chairman accused of violating the law in Veterans Affairs scheme
He added that “we’ll be taking further action” this week to try to prevent a shutdown and default. He did not specify how Democrats would proceed.

Government funding will lapse if lawmakers do not pass an appropriations bill before midnight Thursday.

Treasury Secretary Janet Yellen has told lawmakers that the U.S. will run out of ways to pay its bills sometime in October unless Congress raises the debt ceiling.

Government funding and the debt limit are separate issues. Raising or suspending the ceiling does not authorize new government spending, but allows the U.S. to borrow to cover existing obligations.

Democrats have criticized Republicans for risking economic ruin while opposing a debt ceiling suspension, which they have supported in the past. The party has also noted that the GOP voted for trillions of dollars in emergency coronavirus aid since the last time Congress suspended the limit.

Republicans have contended their counterparts should suspend the debt ceiling on their own as they move to pass an up to $3.5 trillion investment in the social safety net and climate policy without the GOP.

Speaking before the vote Monday, Senate Minority Leader Mitch McConnell, R-Ky., reiterated that Republicans would vote for a short-term funding bill that does not raise the debt ceiling.

“We will not provide Republican votes for raising the debt limit,” he said.

He tried before the failed vote to bring up an appropriations plan that does not address the borrowing limit. Sen. Patrick Leahy, D-Vt., objected to his move.